I have met author Gary Vincent on several occasions (usually when we are appearing at the same event). On one of these occasions, I picked up his work, Darkened Hills, the first book in his series Darkened. While I have interviewed him before for my official blog, the fact that this particular book series takes place in a setting inspired by actual towns in West Virginia (one of which seems to have a real haunted history), I wanted to discuss the Darkened series on The Parting of Veils as well. Read on and check out his books and where he might be next. :) 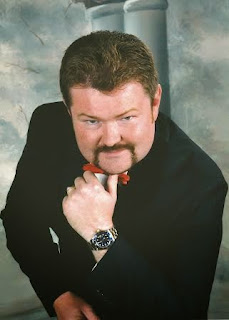 TA: For those unfamiliar with the Darkened series, tell us a little of it and what inspired the story.
GLV: The Darkened series is based upon the book Darkened Hills.  Darkened Hills was written in 2010 and originally intended to be a stand-alone book.  The months leading up to and during the writing of the novel, I experienced several 'dark' episodes in my life: my mother was battling life-threating Stage IV cancer and we were traveling back and forth to the Cancer Treatment Centers of America almost every three weeks for months while they treated her, my beloved 8-year-old dog Roger died of cancer during this time, and a musical album that I had just completed 'died' because I could not promote it because as I was taking care of my mother and holding down a full time job.  I attempted to use the album as a fund raiser for my mom's medical expenses and ended up selling one copy. My daughter Amber was also born the same year during the apex of all this stress and ultimately, I fell into depression.


My friend and co-worker Rich Bottles Jr. had suggested we both try writing a horror novel set in West Virginia.  His book ultimately became Lumberjacked and mine became Darkened Hills. Both were completed in the fall of 2010.


At the time, my life was turning into a collection of real-life 'horror stories' and I thought it might be interesting to create a new horror story set in today's world with characters, plot mixes and settings from classic tales.  For example, what would happen if you took Vincent Price's character from The House on Haunted Hill and mixed with Dr. Frankenstein, but made him a modern-day vampire embodiment from Dracula?  That persona in my book became Victor Rothenstein. Similarly, what if you took Jonathan Harker as himself from Dracula, but instead of a socially-adept lawyer of the Victorian era and made him a common truck driver, blue collar worker from West Virginia.  Also, what if the world of 'salems Lot played out in Salem, West Virginia with new characters, new drama and new horror that pushed the envelope?  What would happen?


When looking into a mirror, a word held to the mirror is seen in reverse.  Much like a 'magic mirror' that looked into an alternate world, Salem, WV's evil twin Melas was born.  In this magical land, all elements of horror seep through into the real world of today's West Virginia.  It is also a play on the word 'malice,' because bad things happen here.  Very bad things.


So with that premise, I began writing Darkened Hills as a way to channel my depression (and love and knowledge of horror stories) out onto paper and see what I could come up with. It first came out as a stand-alone novel and got the attention of the world when it won the prestigious Book of the Year award by ForeWord Reviews Magazine as the top (might I say scariest) horror novel of 2010.


In essence, the formula worked! For me on a personal level, I could write as therapy for my depression and push my pain onto the paper.  For the readers, they got a new horror story with just enough of the familiar to not be totally lost in the wilderness of backwoods West Virginia.


In later years, I saw ABC do something similar with their series Once Upon A Time, where they took characters from fairy tales and set them in modern-day town of Storybrooke, Maine without a memory of their past life.  In Darkened, it is characters from horror stories set in modern-day Salem, West Virginia.  Some love this approach and others, well, let's just say are 'misguided.'  (**grinning**)

TA: Now, the town of Melas, WV was named after Salem, WV and according to the intro in Darkened Hills, Melas shares many locations with the real Salem. Care to elaborate?


GLV: The town of Melas and the town of Salem are perfect copies of each other and many locations are real.  The difference is in the topography, or layout of where these locations are.  In the real town of Salem – just as in Melas – it lies deep in a valley and secluded from the main highway (U.S. Route 50.)  Melas, however, is different in the sense that it is more 'open' and some locations can be seen from far away.  For example, in Salem, the Cecil Randolph house is located in downtown next to the college.  You really can't see it from far away unless you are close to it.  That house's counterpart in Melas – the infamous Madison House – is perched up on a hill and can be seen from all over.  This technique is used in a lot of horror stories – a scary house on the hill – and although I risked being cliché and drawing scorn from rabid horror fans for 'copying' this good ole standard, it really fit having it remote and isolated rather than downtown.  Haunted houses are best when they are isolated and mysterious, am I right?


Another topographical change was moving the location of real life Lake Floyd (just to the east of Salem) to a position closer to the Madison house and elevated upstream from the city.  This tactic proves very well by book three and I'll not spoil it here for the readers.


Many other locations, such as the youth home, the Dairy Queen, the college, and the barn/church are in the same place in Melas as in its Salem counterpart.

TA: What is the creepiest location used in the book series and are there any real life stories or legends behind it?


GLV: The creepiest place in the entire series, in my opinion, is the Runners Ridge mine. Bad things happen there – really bad things – deep in the cold, wet dark.

TA: In the Darkened series, the Madison house was named after Madison, WV. According to your book intro (as well as my own perusal of the internet), Madison seems to have its own haunted history. What are some stories behind that town and are there any good resources (books, etc) to check out on the subject?


GLV: I would say that the best thing a person could do is visit Madison around October and find a haunted house attraction to attend. After all, the best way to experience it is to, well, experience it.

TA: Growing up in and around these areas, did you ever have any creepy experiences?


GLV: I have had quite a few.  When I was a boy, a guy named Jimbo was my neighbor. We were friends and played quite a bit of sandlot football and baseball together. In real life, Jimbo became a serial killer that burnt his house down in our neighborhood, confessed to the crimes on a tape and killed himself in the Town House West motel.  This was fodder for both books one and two of the series.


Another odd thing I had happen as a child – when I was about five or six, I was with family in the town of West Union (the next town from Salem heading west). I was with my cousin walking in the woods and we got separated from each other and I got lost.  At one point, I became entangled in dense briers to the point I couldn't pull free.  I described a similar scene when Ralphie and his brother were in the woods in Darkened Hills and the vampire attacks them.  Luckily in my case, my cousin finds me.  Hard to tell what would have happened had I been left out there overnight.


Another very creepy thing happened when I was sixteen. In addition to literature, I am also into music and my friend Paul and I needed to find a place to record a song I had written called Unsolid Ground. We learned of a guy's home studio and the man lived out near Salem off of Route 50.  To get there, you had to drive down Tarklin Run Road.  It was late afternoon when we got there, however a vicious electrical storm hit the area and fried some of the equipment, including an electric slide guitar that Paul brought with him.


The storm was incredible and lasted deep into the night.  There were downed power lines, flash flooding covering the road and trees branches everywhere, making the path driving back on Trarklin Run Road treacherous. It was incredibly dark.  Shortly after, I wrote a song called Darkness, and thought about that crazy night and coming home.  Eventually when the single was released, Darkness was the "A" side and Unsolid Ground was the "B" side.


As I discuss this now and look back, it is of unique coincidence and remark that the song Darkness and the series Darkened, although separated by almost twenty years from when one was created to when the other was, share a common connection with Salem, WV, and an element of the macabre.

TA: Do you ever revisit these areas?
GLV: Not very often.  Although I do drive through the region on occasion – usually when I am with someone – and point out some of the landmarks that are in the series to them.

TA: What's coming up for the Darkened series and where can potential readers check it out?
GLV: Currently there are four books in the Darkened Series:  Darkened Hills, Darkened Hollows, Darkened Waters and Darkened Souls.  I recommend reading them in that order.


A fifth book – Darkened Minds – is in the works.  By now, a vampire queen rises to power channeling the full forces of darkness and the alliances of good and evil may have to combine to stand against her.


All of these can be purchased at amazon via the series website www.DarkenedHills.com.  Also, you can meet me and grab one (or all) in person at one of my book signings.  To find out where I may be at next, visit www.GaryVincent.com and click "News & Events."  Please note that this is a shared calendar with my publisher, Burning Bulb Publishing, so some events may be for other guests, so please read the description to make sure I will be at an event you are interested in. 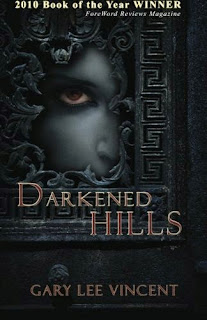 Tiffany Apan is a critically acclaimed independent recording artist, a stage/film actress, author, and award-winning producer/writer. You can find more about her at her Official Website, Blog, Twitter, Facebook, and her production company website. She can also be found on IMDb and her music releases on CDBaby along with iTunes, Amazon, and other digital retailers. She also does freelance writing, and editing. Her own stories are available at Smashwords, Barnesand Noble NOOK, Amazon, and other retailers. Her novel series, The Birthrite Series, is also available in both ebook and paperback form. In addition, she is a contributor to Ravenous Monster Webzine.

Posted by tiffanyapan at 1:52 PM